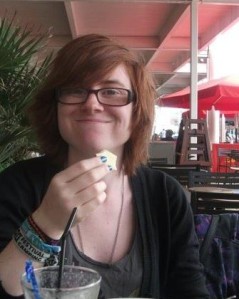 Today, I have the pleasure of featuring Natasha Jones, author of The Luminous Memories of Alexander Vile set to be released at the end of this month.

Bookworm:  So tell us a little about the upcoming book.

Natasha Jones:  It’s a period, thriller, romance novel. There’s a subtle line of romance throughout the book, but the main theme would suggest suspense. It’s set in Victorian London in the late 1800s, around that Gothic period of time. It’s an epistolary novel where it’s mainly divided between Journal entries from Alexander Vile and letters from Joanna (the main female protagonist) to her friend Clarissa. The latter part reads very Jane Austen and the rest is more Gothic, tragic. Here’s a synopsis:

In 1891, in the suburbs of Victorian London, a tragedy took place. Here is a tragic tale compiled by the Maid, who worked her whole life for Alexander Vile, and his late family. She remembers as she wanders up the cobbled streets that echo her every footstep and underneath the over-bearing trees which give her sunless days. She paces through the open market squares where strangers are living their life as if no event took place, all gathering to find out about the new innovations, all dressed in blacks and greys. While the world is whizzing by, she reminisces over a chain of events so romantic and so woeful that you’ll wish you could re-write the ending.

Bookworm:  What inspires you to write?

Natasha Jones:  I used to sit in a park on my break from work (when I was 18), there were animals in this specific park. I would look at the people and animals living their lives and initially I started writing poetry. After a while I decided to start writing a full length novel, though it started as a script and took a few months to become a fully fledged idea.

Bookworm:  Do you have plans for any other books?

Natasha Jones:  Yes, I have started writing my second novel.  I would guess I’m about 10% done. I can’t wait for the summer to just write and write and write.  I started my third novel last summer on holiday; I need to stop thinking of new ideas!

Bookworm:  Who was your favorite character you have written and why?

Natasha Jones:  From this novel, there’s a minor character called Christian.  He is one of those intellectual, arrogant, pompous asses.  I always love the pompous characters in stories.  He was fun to write.

Bookworm:  Who are some of your favorite authors?

Natasha Jones:  Jeff Lindsay. Oscar Wilde. Jane Austen. Stieg Larsson. Jonathan Safran Foer. The above five has written my favourite novels. The language portrayed in Wilde and Austen novels astounds me. And I think unintentionally the majority of Alexander Vile is my attempts to write like Wilde and the ending (it changes narrator) is my attempt to be Austen (in a literature sense). Safran Foer’s humour inspired my 2nd novel. Lindsay and Larsson are responsible for my ever-growing interest in Crime Fiction. I hope to be able to write as in-depth as Larsson and as stimulating as Lindsay one day.

Bookworm:  Do you have any advice to those who are wishing to self-publish?

Natasha Jones:  Network.  Networking is the most important thing.  Talk to everyone. The strangest people inspire and become your friends.